The village’s church, St Cynog’s, was built in 1854 on the site of a medieval graveyard. In 2004 the church had a new spire built, to replace one that was declared unsafe and demolished in the 1970s.[1] The first wedding under the new spire took place on 10 June 2006. In the grounds of the church is The Dead house which is the only surviving Parish Mortuary in Wales.[2]

A notable feature of the Victorian period is that so many more families were able to afford to erect memorials to their loved ones. However the churchyard was also the final resting place for some who whose names were unknown. The poorest too would be buried without great ceremony and with no marker. In the spring of 1882 an unknown woman was heading from Hay to Builth to seek comfort at it’s workhouse. She made it as far as the banks of the Bachwy and here it was she that her pathetic remains were discovered by Frank Hodgkiss ghillie at Llanstephan House at about 3:30pm in the afternoon of April 10th huddled on the side of the stream. She received a pauper’s burial in an unmarked grave.

A memorial stone for the distinguished lawyer Tom Bingham was placed in the church in 2021. It was carved by the well-known local sculptor Caitriona Cartwright and painted by Donald Smith of Evancoyd, a nationally-known conservationist of murals and historic interiors. 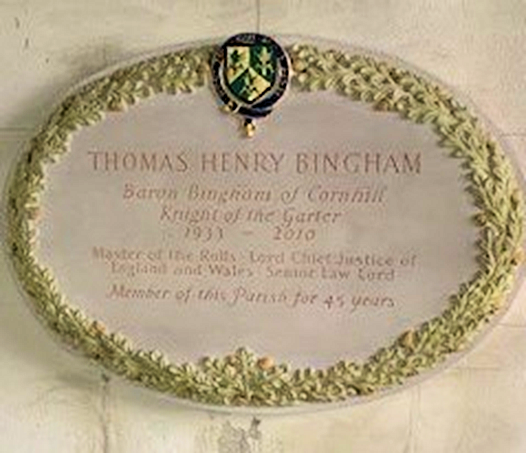 Boughrood’s churchyard is a botanical oasis since – like other churchyards – it has never been ploughed or sprayed. 146 plant species have been identified here.

The churchyard walls provide an oasis for slowworms.  They can be found sunning themselves in the sandy debris on the church side of the wall opposite Village Farm.  A visiting buzzard finds them a convenient meal.