Caesar Augustus Llewellyn Jenkyns, who became one of the first players to play football for Arsenal and the team that became Manchester United, as well as one of the first international players for Wales, was born in Boughrood in 1866.
After playing for Builth and then several amateur sides in the Birmingham area, Jenkyns joined Small Heath (later Birmingham City) in 1888 and was their captain when they joined the newly formed Football League Second Division in 1892, leading them to promotion in 1894. Jenkyns played a very physical game and was a master of the shoulder charge (then allowed in the rules) – his oppoenents feared him and he became known as the ‘Mighty Caesar’ or plain ‘Jumbo’. In the days when sendings-off were rare, he was dismissed four times at Small Heath, and his career there ended in March 1895 after he was ordered from the field for attempting to assault two vociferous spectators in a match against Derby. 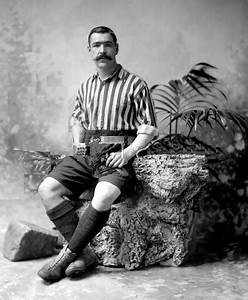 Jenkyns in his Arsenal strip.

He moved to London and joined Woolwich Arsenal, who had been in the Second Division for only two years at that point. He became captain and scored six goals as centre-half in twenty-seven matches. In 1896, Jenkyns gained his first international cap – Arsenal’s first player to do so – in a match against Scotland which the Scots won 4-0. He won eight caps for his country in all. In the same year moved to Newton Heath (later to become Manchester United) and became captain there, before moving on again in 1897 to Walsall, where he stayed for five years. Jenkyns spent his last playing years at Coventry City, which he also coached.
Following his retirement from football, Caesar Jenkyns ran The George Inn in Moxley for a few years and then joined the police force in which his father, and his brother Plato, also served.
Boughrood’s international footballer died in July 1941, aged 74.