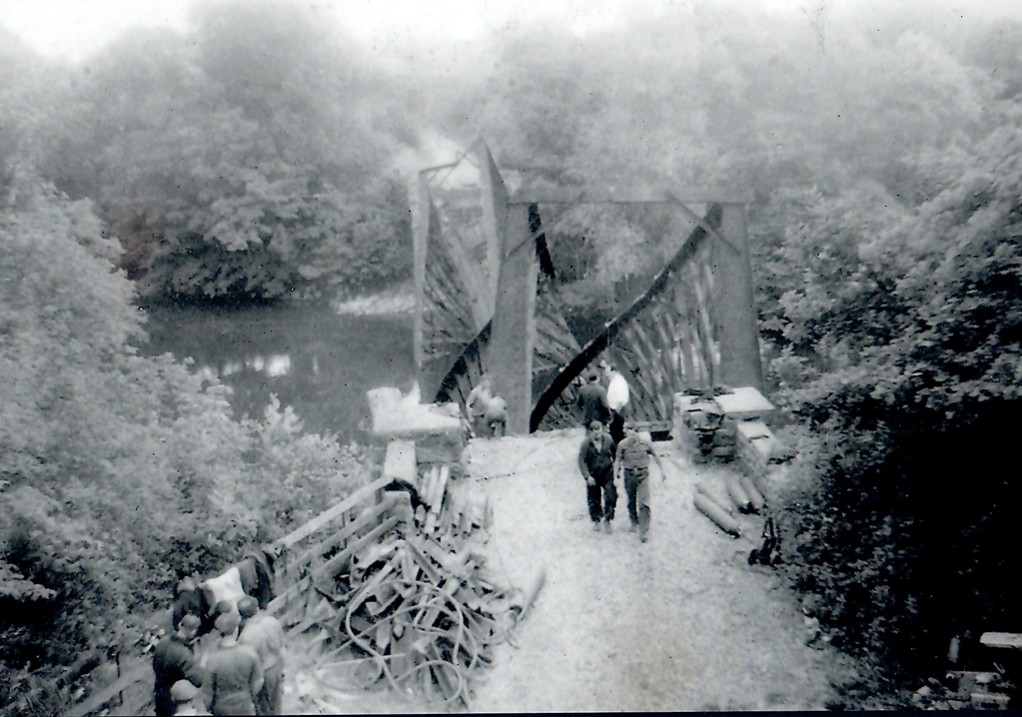 Transcription of article in the TIMES-GAZETTE, July 1964.

Man who died when bridge collapsed

After a ten hour hearing at a Llandrindod Wells inquest conducted by the Radnorshire Coroner on Monday, the jury returned a verdict of manslaughter against the Northern Strip Mining Company of Sheffield, and the case will be heard at the next Radnorshire Assizes.

The inquest was on Glanville Charles Evans of Pentre, Rhondda, who was drowned on July 5th in the River Wye when the disused railway bridge at Boughrood was being demolished for the company.

Together with other men working on the bridge, he was thrown into the river when the 325 ton steel bridge collapsed and plunged into the river.  While the rest of the workmen escaped by swimming, Evans disappeared and his body was recovered from the river by frogmen next day.

Douglas Newby Robinson, the foreman in charge of the demolition gang, told the Coroner, Mr H.F. Ludford, that he had had no previous experience of demolishing a single span bridge of the type concerned.

“Instructions were given to me by the managing director but they were not in writing. I did not have a plan on paper”.

Robinson said the bridge was not marked in any way.  He said instructions were to start work on the upstream side of the bridge but while he was away from the bridge the gang started on both sides.

“You only knew that anything was being wrongly done when it turned out badly?” – “Yes”.

Robinson said he had been told to report daily by telephoning but when doing so the day before the accident, he did not mention the variation of method.

When the bridge collapsed, the gang were attempting to remove a section of metal which had been burned out.  The metal was ‘pinching’, and when the Coroner asked: “Did that mean nothing to you?” Robinson answered: “No”.

He gave instructions to cut out a Vee to release the section.

“Your procedure was to put men on top of the bridge and see what effect the work had” said the Coroner.

“You are supposed to know the effect before cutting. You really had no idea what would happen”.

Robinson told Mr R.J. Hughes, H.M. District Inspector of Factories that he was first employed by N.S.M. Company in August last year. His first experience of demolition was at the beginning of June this year.

Mr Harrry Camm, managing director of N.S.M., said he was a chartered engineer.

“I am aware of the extreme danger inherent in demolition work”, he said. He knew that precautions were required to be taken to avoid collapse.

“There would have been no collapse if my instructions had been followed”, he declared.

“I can accept no responsibility for it”.

Mr Camm said he had every confidence in Robinson up to the time of the accident.

But the Coroner said: “You relied on a man to carry out instructions who didn’t understand them. It was your responsibility to see that he knew what he was doing. Supervision was to be by telephone. There was nobody on the spot”.

Camm: “It was my duty to supervise the demolition, and I did. Robinson contravened my instructions”.

Answering Mr Michael Evans, who appeared for the relatives of the deceased, Mr Camm said: “I gave verbal instructions”.

He was satisfied that his method of demolition was safe, but agreed if the procedure was varied, danger would arise. He told Robinson that. A dumper was used in the attempt to pull out the bridge section.

Mr Camm said he had warned the foreman about the accumulation of weight on the bridge.

Summing up, the Coroner said: “They tampered with the bridge because Robinson had no idea what he was doing. Mr Camm should not have left him with no proper experience and no skill on this dangerous operation.

“There was nobody there to observe the pinching and clear everyone off the bridge. That should have been done and would have been done if the company through its employees had had the foresight to have an experienced man to supervise.

Earlier a Newtown man, Mr John Williams, who was employed on the bridge as a welder and acetylene cutter, said their orders were given by their foreman to cut the cross members of the bridge. Normally the men wore safety belts attached to the safety wire, when working on the top of the bridge. That morning, although the belts were on the bridge, they were not used.

Mr John Arthur Weale, of Windsor Cottage, Newbridge-on-Wye, who worked for N.S.M. said he took a dumper to the bridge on July 5. On arrival he watched the men cutting one of the metal sides of the bridge. While there, Mr Williams asked him to fetch something that was not on the bridge.

On returning, he had only taken about twenty paces across the bridge when it collapsed. He told the Coroner: “It all happened in a flash”. Mr Weale who was thrown on his back and had to crawl to safety, did not see what happened to the other men.